There are several concepts and philosophies related to the American Hung Gar martial arts system, including 5 Animals, 5 Elements, and 12 Bridges. 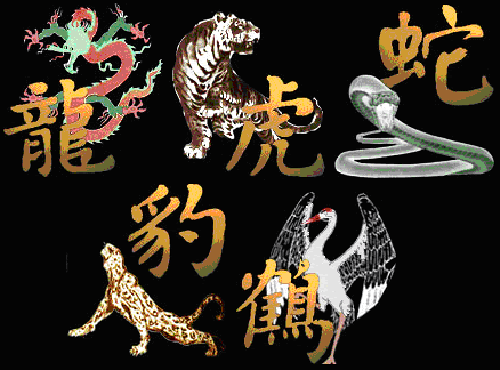 The theory of the 5 animals began when Shaolin monks observed animals in the wild and developed martial techniques from those movements.

For American Hung Gar students, the five animals are utilized to teach the "spirit" of various techniques and strategies in an understandable and memorable format.

TIGER: Tigers are aggressive yet cunning. Known for great external strength and agility, tiger training helps develop strength in the bones, joints and tendons, and strengthen the back and spine.

CRANE: The crane is a very patient animal. Its ability to stand on one leg for many hours is testament to its concentration and focus. Its ability to defeat an opponent arises from the dexterity to avoid and/or divert the opponent's blows while striking.

LEOPARD: The leopard is mobile yet powerful, combining speed and agile footwork to overcome its opponents. The leopard's footwork will develop good balance and quick reaction time.

SNAKE: The snake is relaxed and ready. Snakes strike with great speed from a relaxed state using their soft internal power. 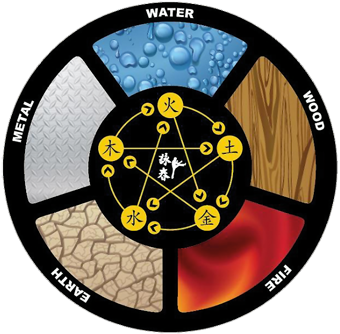 Five Elements Theory is a philosophy used to describe interactions and relationships between things. The five elements — wood, fire, earth, metal, and water — are believed to be the fundamental elements of everything in the universe between which interactions occur.

For American Hung Gar students, the Five Elements Theory is used as a training tool. The elements theory is intertwined into our exercises to help students understand which techniques are designed to counter/overwhelm others.

Interactions Between the Five Elements

Generating processes promote development, while overcoming processes control development. By promoting and restraining, systems are harmonized and balance is maintained.

The generating interactions of the five elements are like the conception, gestation, birth, and nurture relationship between a mother and a baby. Such element pairs are deeply attached, and together imply success and luck. 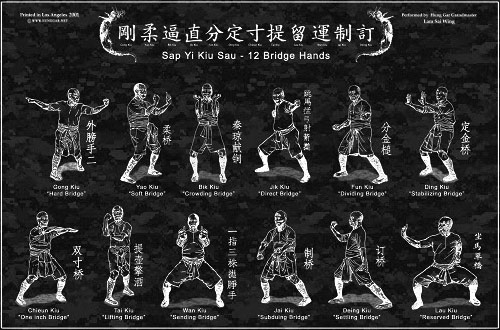 The 12 Bridges of American Hung Gar is both a basic and advanced concept in this system. Essentially, the bridge concept explains the various types of contact (bridge) between yourself and your opponent(s). More than just moves/techniques, just about every technique could form each of the different bridges.

The 12 Bridges originated from the Fukien Southern (Shaolin) temple. They were derived from the Tid Sin Kuen (Iron Wire or Iron Thread Set of American Hung Gar).

The 12 Bridges of American Hung Gar are: